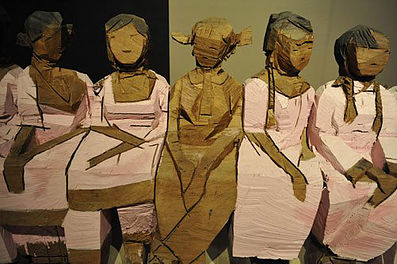 And so, much as White men (and various other types of men and women) have been doing for hundreds of years, I arrived in East Asia (Taiwan) looking for adventure and loot! And much as East Asians have been doing for hundreds of years, I was stared at by people who felt that I was really different from them on some kind of fundamental level. And, yes, it does bother me somehow, even to this day, despite my history of wandering. But doesn’t change the fact that I love Taiwan!

In fact, in the last post I suggested that I might have been in some way prepared for the cultural adventure here in Taiwan by my long history of interacting with different groups of people worldwide. But when I got here I made many mistakes, and was almost totally unaware of the specifics of East Asian culture. You could almost say that I bumbled and stumbled my way into knowledge of what not to do! I spoke too loudly in public places. I complained noisily when things didn’t go well, not knowing how badly I was losing face and causing others to lose face. I confronted people directly, and said things like “That’s stupid!” if someone did something stupid. As if I was cool to call it stupid, instead of actually being a fool because I was saying too much! On many different levels, I was out of tune with all the subtle signals that people around me were trying to convey.

In terms of consequences, however, that didn’t matter in Taiwan quite as much as you might think. The locals here tend to be one of the friendliest groups of people in the world to foreigners, and very tolerant as well. This made it possible to keep making mistakes without even realizing it.

Yet gradually but inexorably, pattern recognition set in, data was compiled, and a mental map of the culture here began to form. I don’t mean the obvious things, like Taiwanese are laid-back but hard-working and very family oriented, or that there is a strong influence of traditional culture on the modern. I mean the deeper parts of culture that govern expectations and emotional reactions to other people in social situations. These were different from any other place I’d been before.

After enough interactions – both successful and unsuccessful – with Taiwanese, things clarified into two basic precepts to avoiding problems in Taiwan:

1) Chill out! People here did NOT like it AT ALL when other people –especially foreigners – got angry, rowdy, obviously frustrated, or in their face in any way. Go with the flow!

2) Don’t be fooled! People here could have it in for you without your knowledge. Or could seem to agree with you without actually even understanding what you were saying. Or seem like the sweetest people in the world until you worked for them, but then…! Not that everybody was like this; just some people. But they could affect your life.

If you could follow those two concepts, you’d be OK. People would treat you fairly well indeed, and you could live happily here, provided that you liked the food and other aspects of life here.

But that still didn’t change the fact that Taiwan is part of East Asia, thousands of kilometers from Europe and the Mediterranean, on the far side of the Eurasian land mass. East Asia is isolated from the West by vast steppes, deserts, tundra, jungles and mountains. Hence, it had evolved autonomously for thousands of years, totally self-sufficient in terms of culture and technology, before Whitey ever showed up in his ships. Over history, the different ethnic groups of the region, dominated by the Han of China, had developed knowledge of and relationships with each other; they had become familiar co-features in a (largely) shared view of the world. So when the bold, stinky and loot-lusting gingers showed up in the 15th century, it was a complete shock that such people could even exist. It was even more of a shock that they seemed to have little interest in fitting in to the East Asian’s largely shared view of the world, and indeed had their own very different view of the world. And it got even worse! They even imposed their own view of the world on the Asians! Aiyo!

The seismic wave of this cultural impact is still reverberating, and the initial response of “Huh?” when they see foreigners has faded only in part. People’s eyes almost pop sometimes when they see the see a White guy. (And they definitely pop when they see a Black guy!) For example, I’m in the elevator, going down. It stops on another floor, the door opens and there’s a local guy waiting to get into the elevator: He sees me: “Oh! A foreigner!!” his face says, so he either looks slightly terrified or has to engage me. Note, he has no fear that I will mistreat him. His fear is simply that he has to share space with me. Or, a mother is on the subway with her little boy, who looks at me and sees a face that is different, so quite normally he stares. Most probably he would get over it after a few minutes and look at something else. But instead his mother tells him how to react by her reaction, “Say hello! Say hello!” she says, making a big deal of it, and passing this “sense of intrinsic – as opposed to superficial – difference on.

Of course, the xenophobia in Taiwan is a much milder version than that of Japan or Korea, and can be in fact quite pleasant. It is a positive form of discrimination in many social situations. Ladies tend to think of foreign men as being more handsome than they would be regarded back home. People are very friendly and polite, helping out whenever necessary, and saying hello with big smiles.

But there is a deep sense of “us” and “them”, a high, steep wall around the culture that is almost insurmountable. No matter how long you are here, you will always be asked where you are from. This is something that is quite frankly annoying for those of us who have lived here for a long time. Don’t get me wrong, Taiwan is great, and I respect and have great fondness for the Taiwanese. But as Boromir might say on Facebook, “One does not simply become Taiwanese!”

This is very different from the experience of those of us who have come from multicultural societies.