Cross-culturalists talk about the distinctions between internal guilt cultures like the West and the public shame (face) cultures of Taiwan and the East. But I believe there is something that transcends and underlies both of these cultural distinctions – the sense of justice. I think this is hard-wired for the entire human race. Alas, it’s a part of us that is too often activated in the negative.

When I was ten years old, my family moved to Lesotho in Africa from 1975-77. The country only had a population of one million people back then. It is a sovereign country geographically surrounded by its much larger and more populous neighbor, South Africa. It is called “the Roof of Africa” because the entire nation is above 1000 meters. At those altitudes, the sun cuts razor sharp shadows through the dry air. There are winter frosts, and a sky full of stars. It’s an almost forestless country, and the many sheep and cattle grazing on the mountain slopes keep it that way. To make up for the lack of trees however, their dung can be combined with mud to build huts, and is a good fuel for cooking fires, although its smoke adds a tinge of pungency to the air. 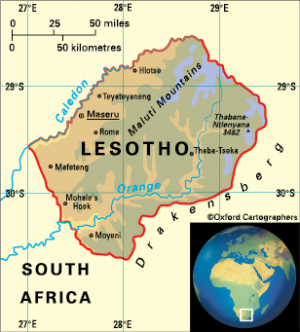 Maseru, the capital city, had a whopping 30,000 inhabitants. The roads downtown were OK, and led you past a few fancy buildings like an art shop shaped like a gigantic Basuto hat, and some banks and government offices. There was one small truly posh neighborhood, a couple of nice ones, and then in declining order of poverty, plain-Jane concrete block homes, and then shanty towns. You could hear the summer rain coming at a distance by the sound it made on the tin rooves.

Out on the street, you could see who lived where: African in a brand new Mercedes-Benz with driver? Posh area! Anybody in a Land Rover, Volvo, or kombi? Nice area! Any Whites? Nice area! African walking on the street in decent white-collar garb? Cinder block homes. Tsotsi hat, blanket, or overalls? Shanty town. Little blond boy in safari shorts and sandals? That would be me, dear reader! I must have gotten that world-class African smile ten times a day, especially from older countryside women who would beam down at me, touch my hair and say “Heh heh! Such pretty hair! Heh heh heh!”

My father was a civil engineer on a Third World development project, building a small center of civilization in a remote mountain area. He was on site most of the week. I went to the international elementary school with the other expat kids and the local elites. We lived in a nice area in a lovely old brick house with grape vines, rose bushes and plum trees in the garden. We had a coal fireplace for winter, no TV, and a 4-digit phone number. We had maids who lived in the shanty town, chubby cheerful women. 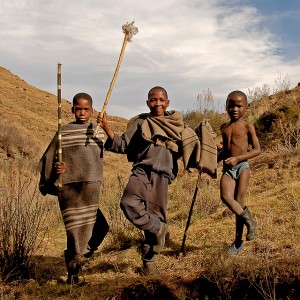 We lived right across the street from the Maseru Club, the colonial era country club, with swimming pool, tennis courts, golf course, etc. There was a bar where white dudes would get florid on Saturdays. My band of ruffians and I wandered the grounds and beyond, playing kick-the-can, talking about Formula race cars, and shooting at pigeons with pellet guns. Once we killed a Black Mamba hiding in a rock crevice after shooting it about 20 times! Occasionally we had run-ins with a group of homeless African boys who caddied at the gold course. They waited around by the cars until a group of players came in, hoping to be hired. Those not actively caddying would open the car gas tanks, lower a piece of string with a rag at the end into the gas, and then sniff it to get high. After a few years of this their neurological and physical health was shot. When we cut through the car park sometimes they would shake us down for change. I was scared of them, because there were a couple of mean older ones who looked pretty f***ed up. There were also some scrawny younger kids. These poor guys had a pretty rough life. But my band of privileged young expats and I happily roamed far and wide. We were ninjas who could sneak into any part of the club undetected. God help us if we did get caught! We’d get a hoarse-voiced yelling at by “The Colonel”, an old British soldier who’d lost a lung in India in World War II. He’d come after us shaking his cane in the air, and kick us out for the rest of the day, if he found us up to no good. 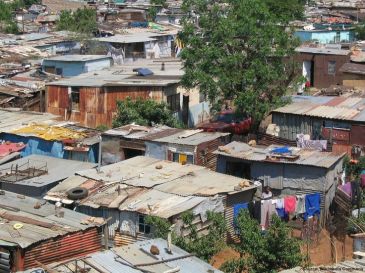 On Sundays, families would gather for a curry buffet on the veranda. The women folk would come out, ladies with hats and make up, young girls in pretty dresses. After curry, all the kids would watch Sunday matinees like silly Dean Martin movies, or Tarzan. After that, us boys would hang around outside as parents gradually came out to collect their kids, get into their cars and drive away. That’s when I got into a fight with a local kid. It was my fault.

One day when we hanging around a bunch of the caddies came to beg for change. There was one skinny little guy who had mucus constantly running out of his nose, maybe from sniffing gas. He had his hand out, and I pretended to give him some change, but then pulled it back and put it into my pocket – an obnoxious boyish prank. Oh, that pissed him off! He yelled at me, and then took off his belt and tried to whip me with it. This wasn’t very effective because he had to hold his pants up with his other hand! He was a scrawny little guy, probably as least as old as me but physically no match due to general poor health and nutrition.

All the other caddies and local elite or expat boys knew at once without speaking that no one else should get involved. The fight was on! “Get him, John!” “Go for it man!” He kept whipping at me with the belt and hauling up his pants with the other hand, his eyes glaring at me, snot running down his face. I got bolder and rushed him, chasing him around a parked car, and then closed on him, grabbed the back of his head with my left hand and went to punch him in the face with my right. He grabbed my punching hand with both of his, stopping my fist about 10 centimeters from his mouth. He had dropped his belt and probably his pants too, but I didn’t notice! I made a big effort and got in a pretty good punch right on his grimacing mouth. Bop! He whimpered and blood suddenly formed clear red lines in the cracks between his teeth. My whole feeling changed at once. I suddenly lost all desire to fight, so I let him go. He ran a short distance away, and threw rocks at me until a big Canadian boy – a silent friend – came up and clobbered him one. The kid, bloodied and beaten, ran down the road sobbing, clutching his pants, back to the golf course he called home. I had won the fight. Later we named him “Snot-nosed Jack”.

A few weeks later, I was completely alone, walking across the polo field toward the Maseru Café to score some chappies chewing gum or perhaps a Stoney’s ginger beer when I suddenly saw – to my shock – Snot-nosed Jack. He was alone on the road right by the polo field, only about 100 meters away. He shouted, then climbed through the four-strand barbed wired fence and came at me. I was scared! He came right up, full of angry words, and started to take off his belt. I told him no, it’s OK. I don’t want to fight. I offered him a small amount of change. He could see that I was scared. His face totally changed. He beamed at me, very happy, and refused the money. This was a point of honor. He walked away happily, waving goodbye. There was no sneer, no attempt at retribution. We were good.

That brings us back, dear reader, to my starting point. The “standard” cross-cultural analysis is that Africa is more of a shame culture, which involves public space. But the boy hadn’t “shamed me back” in front of my crew or his. There were no witnesses. I think his happiness was about warrior culture, something ingrained in boys in Africa. He had stood up again and prevailed against this strange “rich” White boy who had insulted and beaten him. He had proven his courage, and hence his value as a man, hence as a human being.

I don’t think this kind of thing would have happened in Taiwan. I think here he would have got some friends and jumped me, or just stayed away. But I think anybody reading this story from Taiwan, Canada, Lesotho or whatever country would feel that somehow justice had been done. 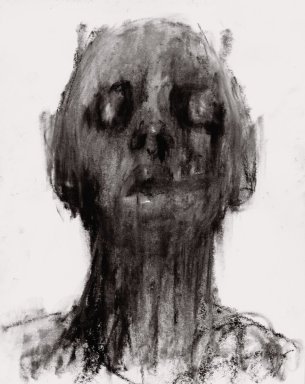 EPILOGUE: I don’t think this incident is a metaphor for race relations, but feel free to interpret it any way you want. Lesotho is in terrible shape now, ravaged by AIDS. We can thank both Western and African superstitions for that. The Thaba Tseka Project my dad worked on is now considered a textbook case in Third World development failures, of how simply throwing money at a problem doesn’t work. South Africa – also AIDS blighted – has transitioned from competent apartheid to incompetent freedom, for now. Let’s hope for the best! And Snot-nosed Jack? Here’s where I’d like to have a rosy conclusion and say that maybe somehow he’d remember me as a friend.

But the truth is he’s probably dead. Where’s the justice in that?